As the son of a traditional Munich farming and entrepreneurial family, Rudolf Ballauf has responsibility and a pioneering spirit in his veins. So it is not surprising that the man, for whom the well-being of people and society was always a great personal concern, is still dedicating himself to an outstanding project at the age of 85: the cultivation and production of natural wine at his Hacienda Arcos, near Mijas in Andalusia.

The Best for Nature and Poeple

As a wine connoisseur, wine lover and member of the Commanderie de Bordeaux and the Jurade de Saint Emillion, the Munich visionary Rudi Ballauf came up with the idea of rescuing a small strip of nature in Andalusia from being built on by residential complexes and hotels, with the idea of using it as a vineyard.

An ambitious project with important added value for nature and the local people. Because in the region, the small-scale and sustainable agriculture that exists there has been increasingly diminishing due to tourism in recent years.

The Hacienda los Arcos is a winery on the Costa del Sol, southwest of Malaga near a region that in recent decades has been known more for tourism and golf than viticulture and sustainable agriculture. How did you find out about the site?

Rudi Ballauf: „Almost twenty years ago, my wife Sigrid and I visited Andalusia – to be more precise, Mijas/Entrerrios in the province of Malaga, a tranquil region just a few kilometers from the Mediterranean Sea at the foot of the impressive Andalusian Coastal mountain range. Our friends owned a piece of land in this picturesque and historic area which they used, among other things, as a horse stud. A strip of open green farmland of wild growth, cultivated by small farmers.

I was immediately drawn to this romantic, hilly landscape, to the wild herbs, bushes and grasses swaying in the wind while dragonflies and ladybugs buzzed everywhere. But what excited me most as a wine lover was that the property also included wild, open spaces of land suitable for agricultural use. Why not for viticulture too?“

At that time, could you already imagine working here yourself and developing a winery?

Rudi Ballauf: „Of course, I was immediately struck by the thought of whether wine could be grown and produced there again, under innovative, natural and environmentally friendly conditions – as it had been 150 years ago. Before the vine pest catastrophe in 1863, the province of Malaga was the second largest Spanish wine-growing region with around 100,000 hectares of vineyards. However, the area under cultivation was reduced considerably due to the pest infestation. Today there are 12,000 hectares in this region. Because of my personal affinity for wine, I came up with the idea of acquiring the piece of land in order to plant wine there myself and to protect the area from development in the long term. Because around the turn of the millennium, the construction boom moved further and further inland from the coast and threatened to take over this untouched piece of nature. It took a lot of effort to get the project off the ground. I knew what good wine is and how to make it, but I didn’t know what environmentally friendly viticulture in the south meant. We had to figure out over the years how to grow and produce wine there as naturally as possible. Soil quality was also important. Since the property I purchased is not part of the D.O. Malaga, i.e. the „Denominacion de Origen“, which belongs to the Malaga designation of origin, it was initially only possible for experimental planting. In retrospect, this turned out to be a stroke of luck, because it gave us time to analyze the soil and plants and to develop an environmentally oriented viticulture concept. Incidentally, at the same time winegrower Javier Lopez also settled near Mijas Pueblo. He produces his wine “Tamisa” there. In this case, the two of us have been allowed to plant and produce for two years now“.

Such an undertaking can hardly be mastered alone. Did you have local support?

Rudi Ballauf: „Yes, we have great supporters, to whom I am very grateful: Hans-Peter Schmidt from the Ithaca Institute for Ecology and Climate Farming in Switzerland, who supports and advises us in connection with his Swiss winery Mythopia in matters of oenology and soil culture. The Andalusian oenologist and chemist Simbad Andres Romero, who helps us with his expertise to realize the project and Antonio Sevillano Marin, who is of great service to us with the technical implementation on the hacienda. Natural wines, as we call them, are made from grapes that grow as naturally as possible, without any help or additives, becoming natural wine. The prerequisite for this is provided primarily by healthy and chemical-free soils. On our organically certified premises, we strengthen the growth and health of the soil in a variety of ways: self-produced charcoal, self-made substrates from green plants and vetiver grass help us to promote the formation of humus. Due to the better soil substance, the development of our grapes can be left to themselves. Subsoil irrigation protects our vines from drought and there are catchment tanks for rainwater. In order to promote the highest possible level of biodiversity in the vineyards, we work with winter greenery, which withers in summer and protects the soil from heat and drying out. There are fruit trees in the vineyards and our insect houses protect the small animal world.

In short, our formula is: „Departure from chemicals and soil pollution, using natural growth and holistic ecological plant protection“, because I am convinced that grapes which reflect the character of the terroir can only grow under healthy and natural growing conditions. As already mentioned, wines are also made in the cellar on a purely natural basis without any additives. The wines are stored in clay amphorae for the long maturation period in our cellar“.

You use amphorae, the world’s oldest method of making and storing wine. What is the advantage for you compared to conventional containers?

Rudi Ballauf: „We deliberately opted for this original and natural form of storage because amphorae are odorless compared to wooden barrels. The oxygen permeability compared to wood can also be calculated more precisely. Also worth mentioning is the temperature compensation through the terra-cotta. Our wines should not absorb any foreign flavors during their development in the cellar.

We see our wine production as a holistic process with as little as possible outside influences. Our aim is to produce high-quality and natural wines with character, not flawless standardized mass-produced goods.

We are proud to revitalize viticulture in Mijas and its surroundings and to ensure that the soil is preserved and improved.

To return farmland back to its intended purpose in the middle of a tourist environment and under sometimes extreme climatic conditions and to produce natural wine instead of commercial wine – that requires a lot of strength, endurance and patience. But the result is worth it. By that I mean not only the wine, but also the benefit for nature and the region“. 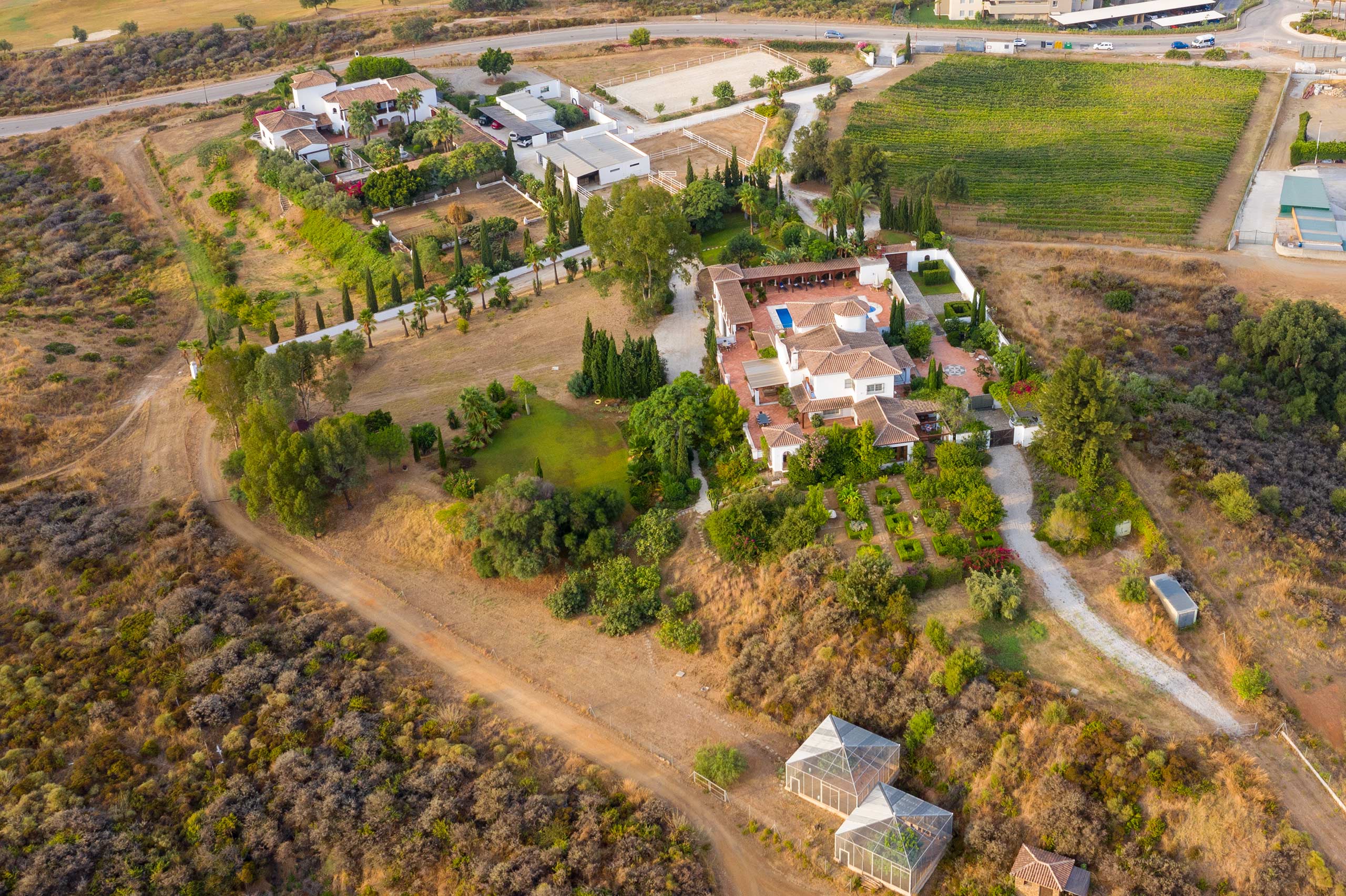 The Hacienda los Arcos and the associated farm buildings. 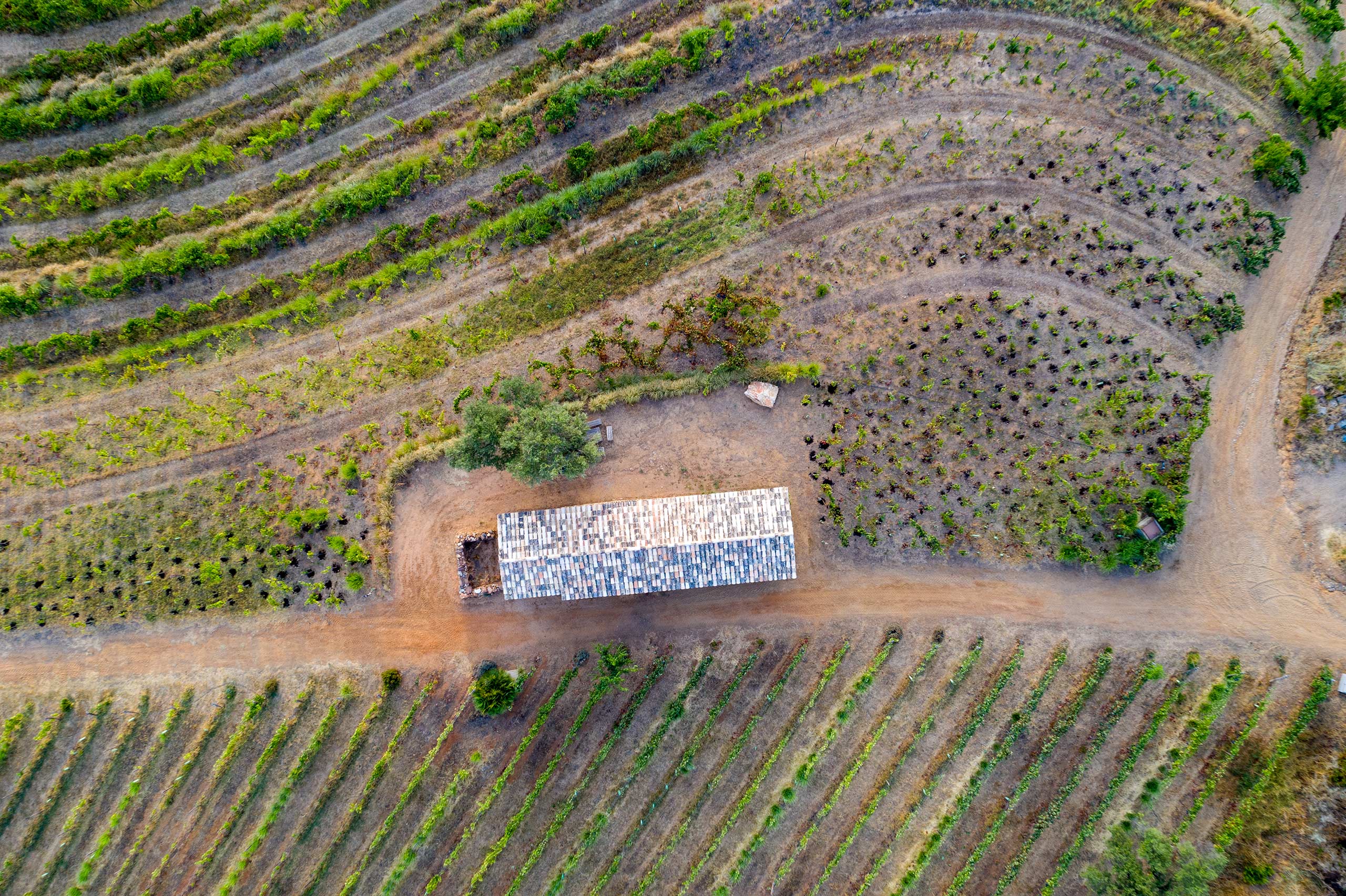 A bird’s-eye view of part of the northern vineyard. 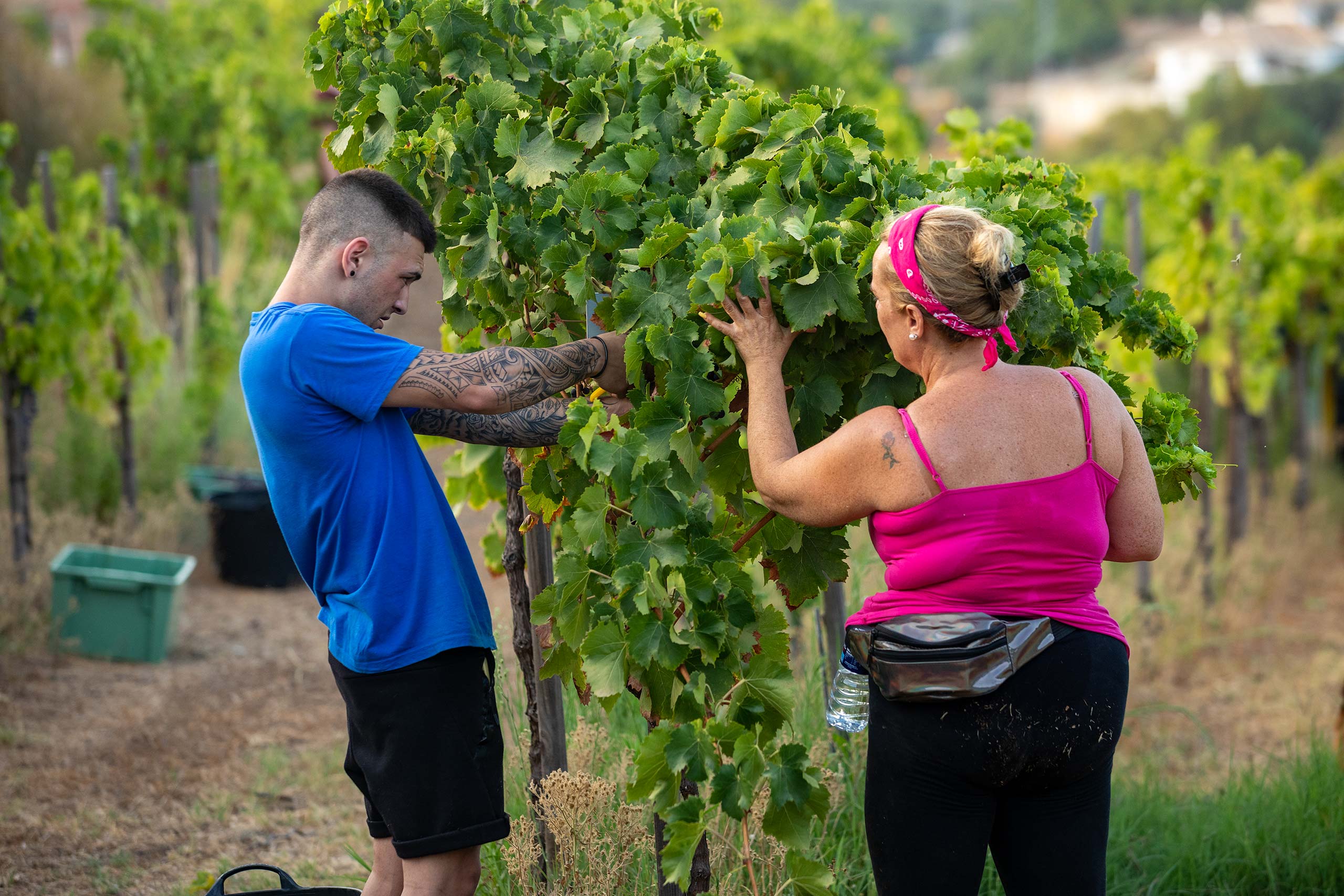 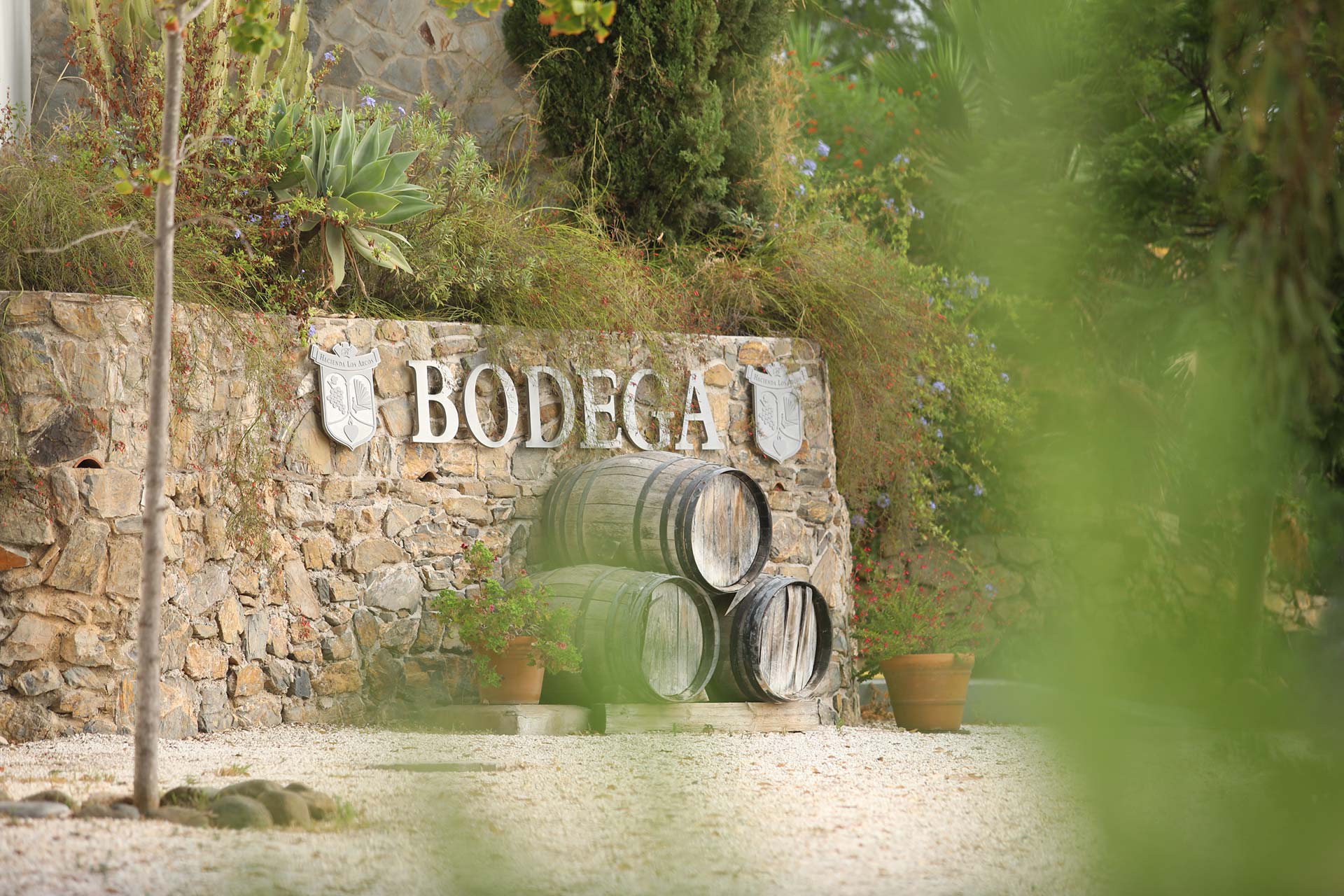 The bodega of Hacienda los Arcos. 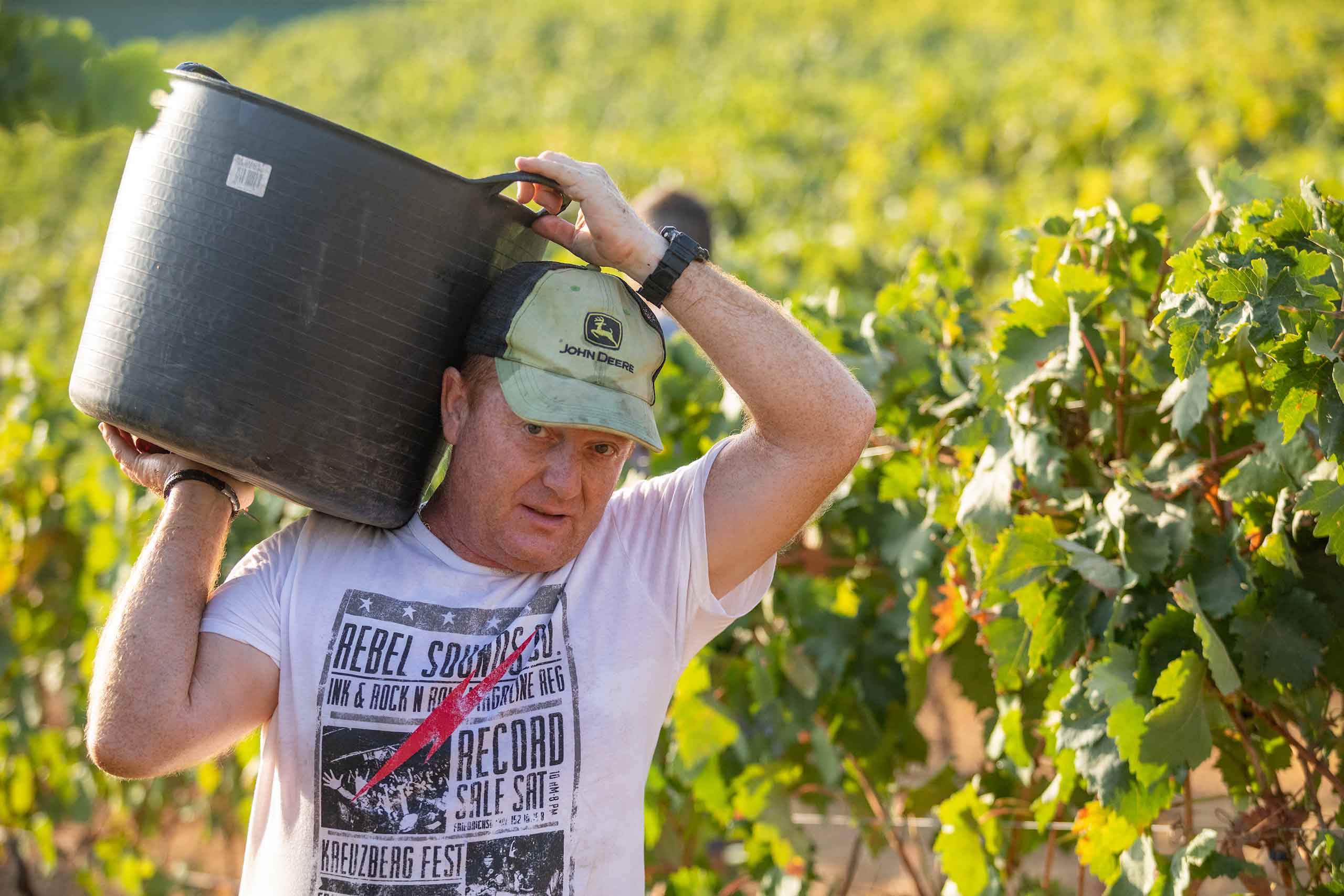 Our technician Antonio Sevillano Marin lends a hand with the harvest. 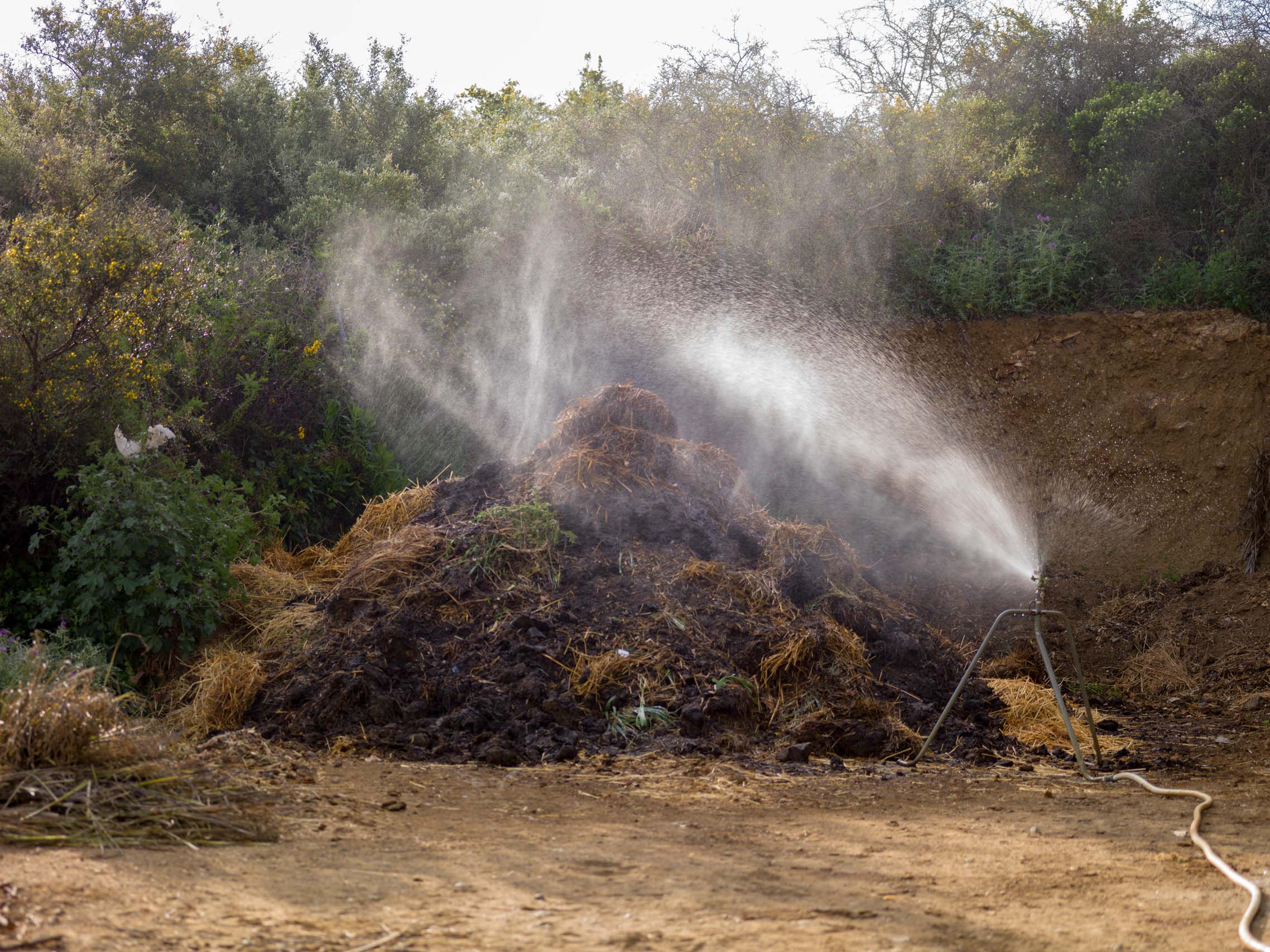 We replace the use of chemicals with self-produced substrates from green plants which improves the soil’s substance. 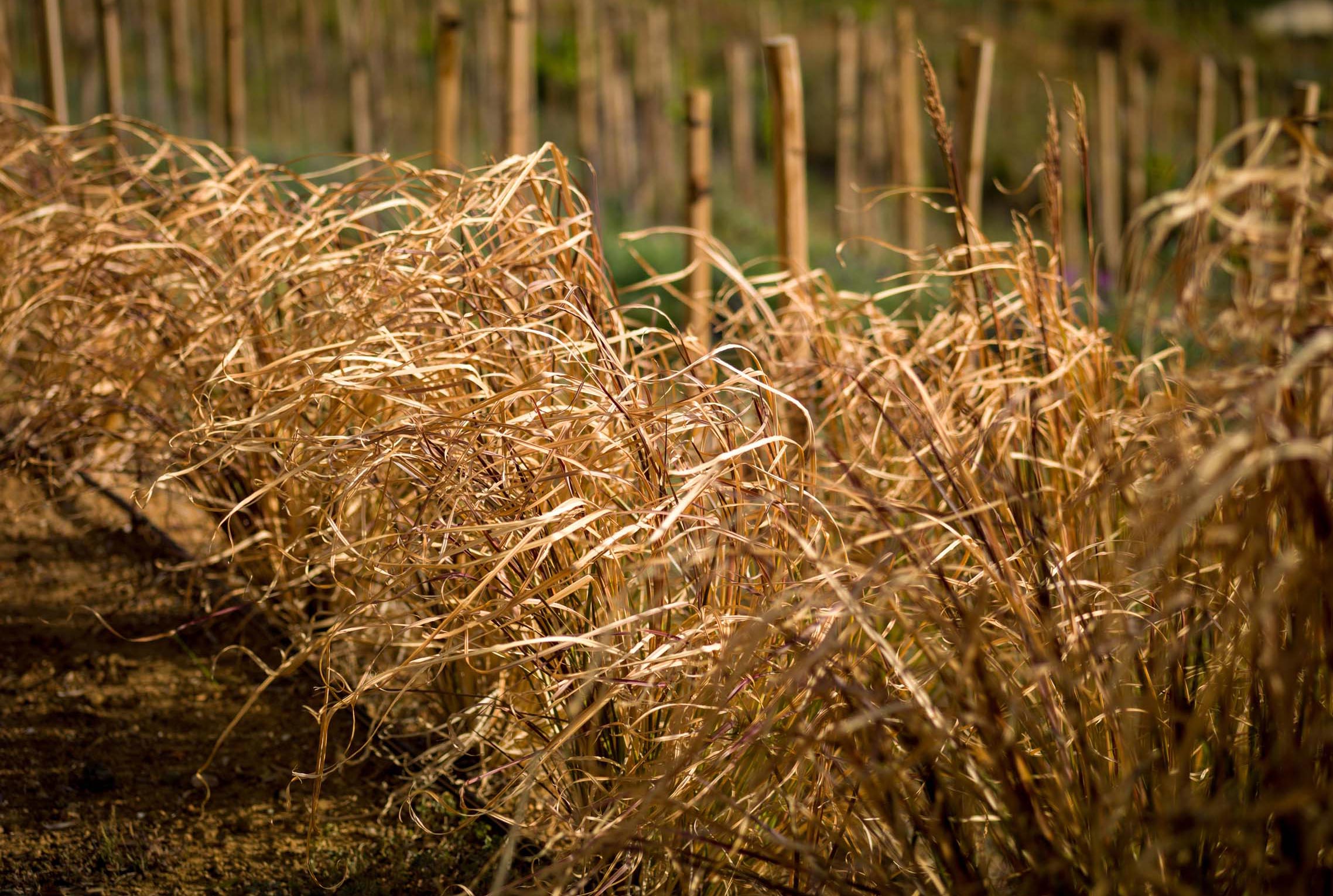 Vetiver between rows of plants to improve soil quality. 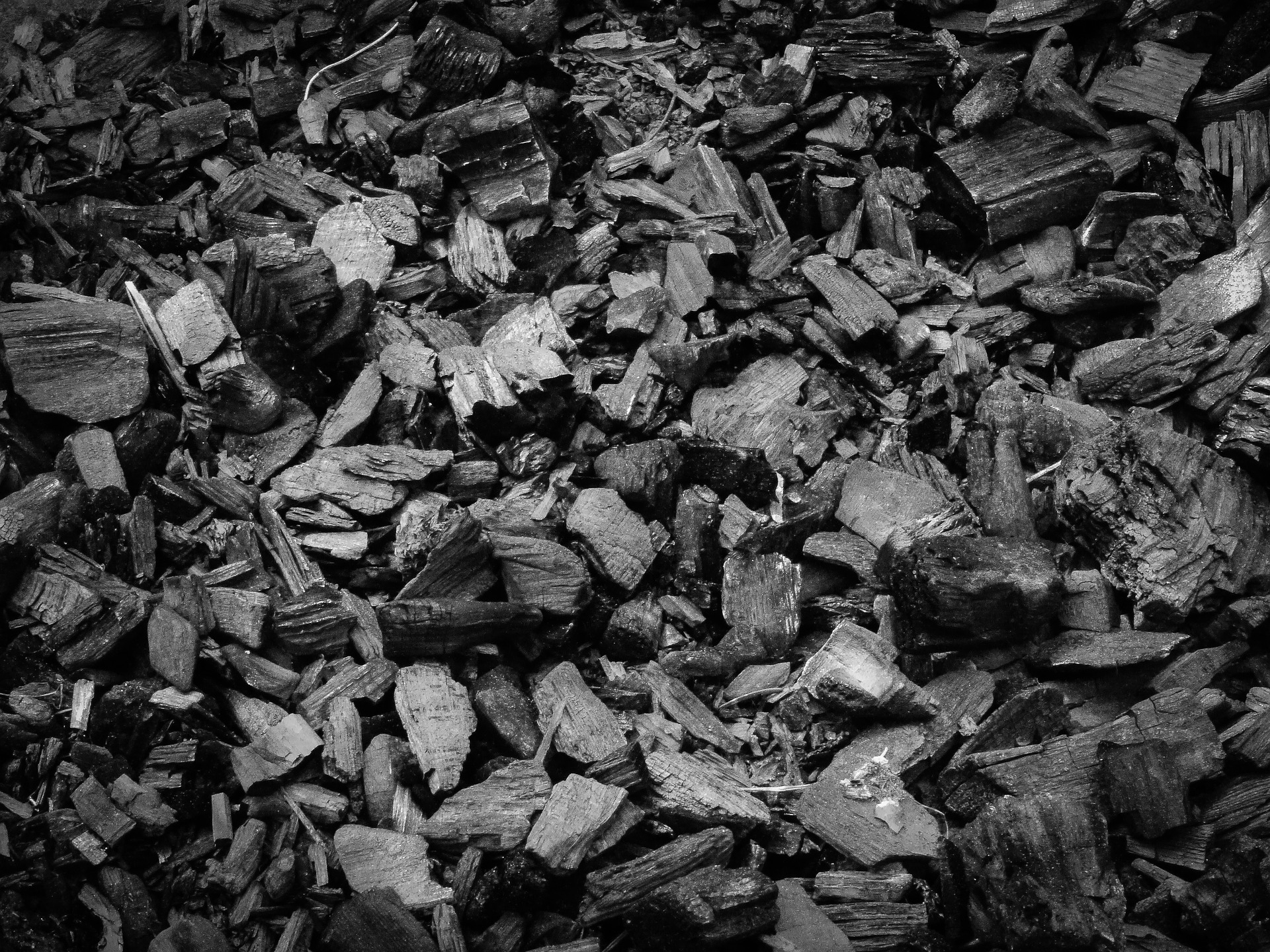 Self-produced charcoal to promote the formation of humus in the vineyard. 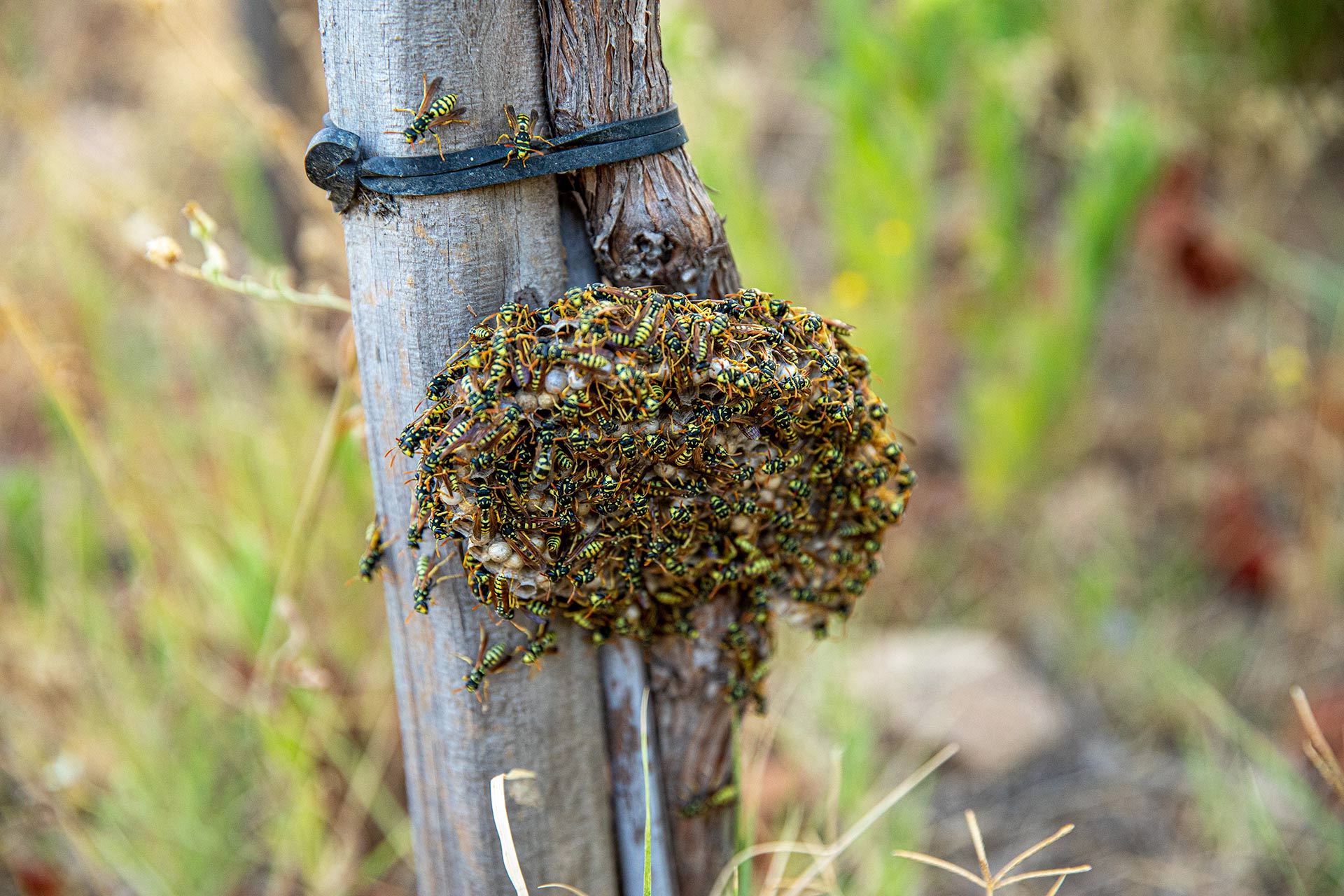 Insects (e.g. wild wasps in the picture) are an important component of biological pest control in our vineyard. 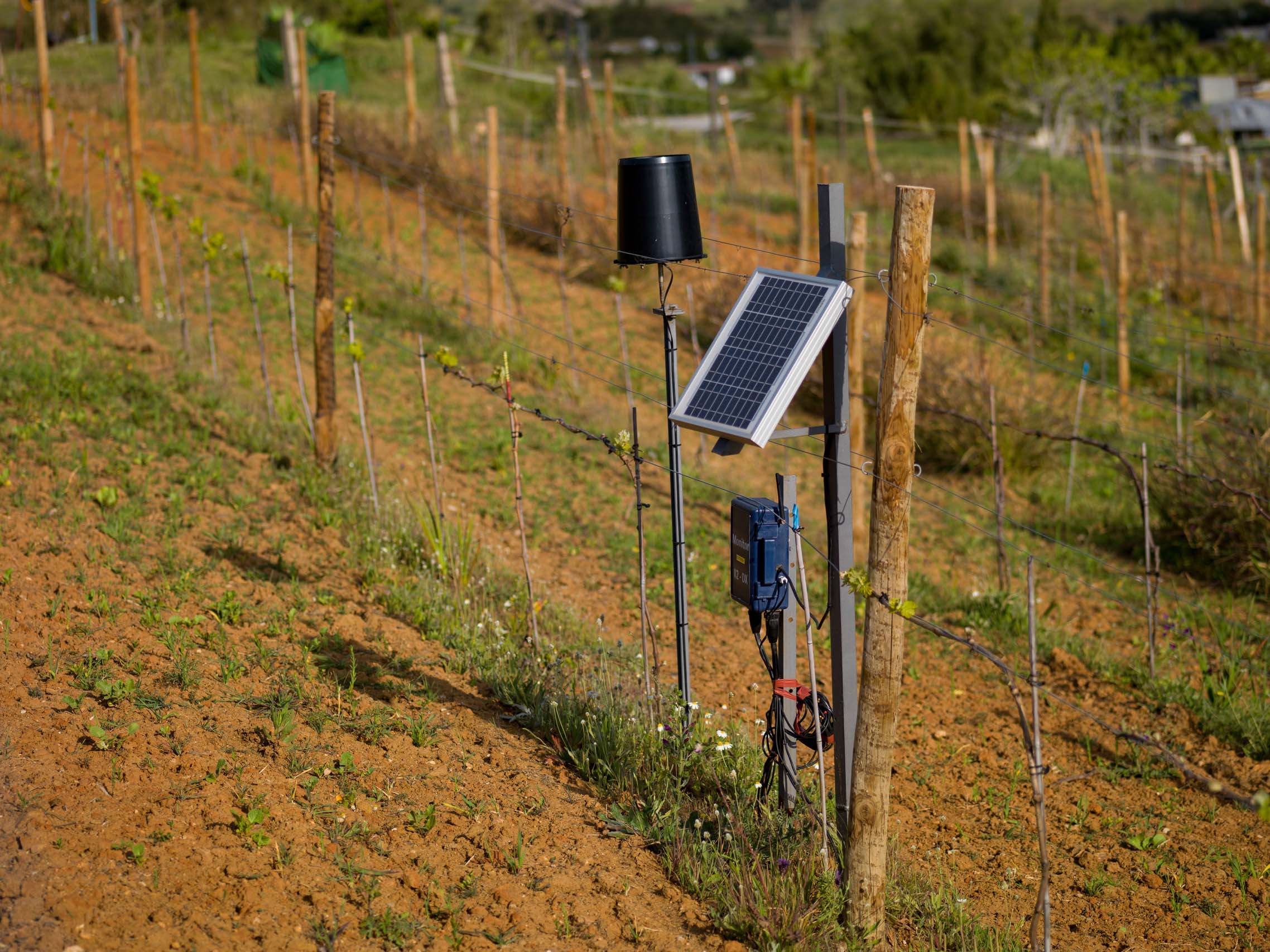 Of course, we operate our measuring devices with solar power. 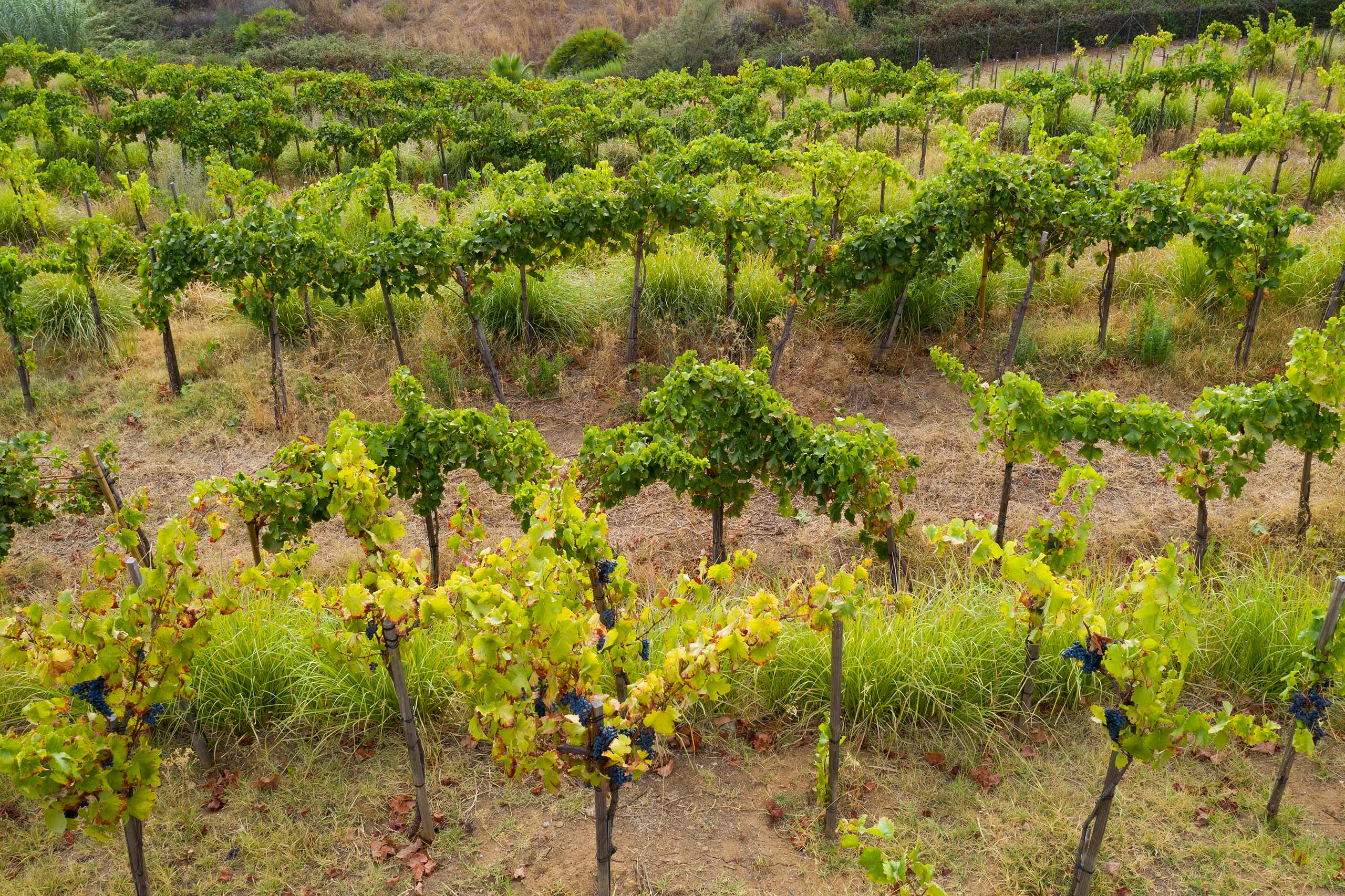 Healthy and strong vines in our young vineyard. 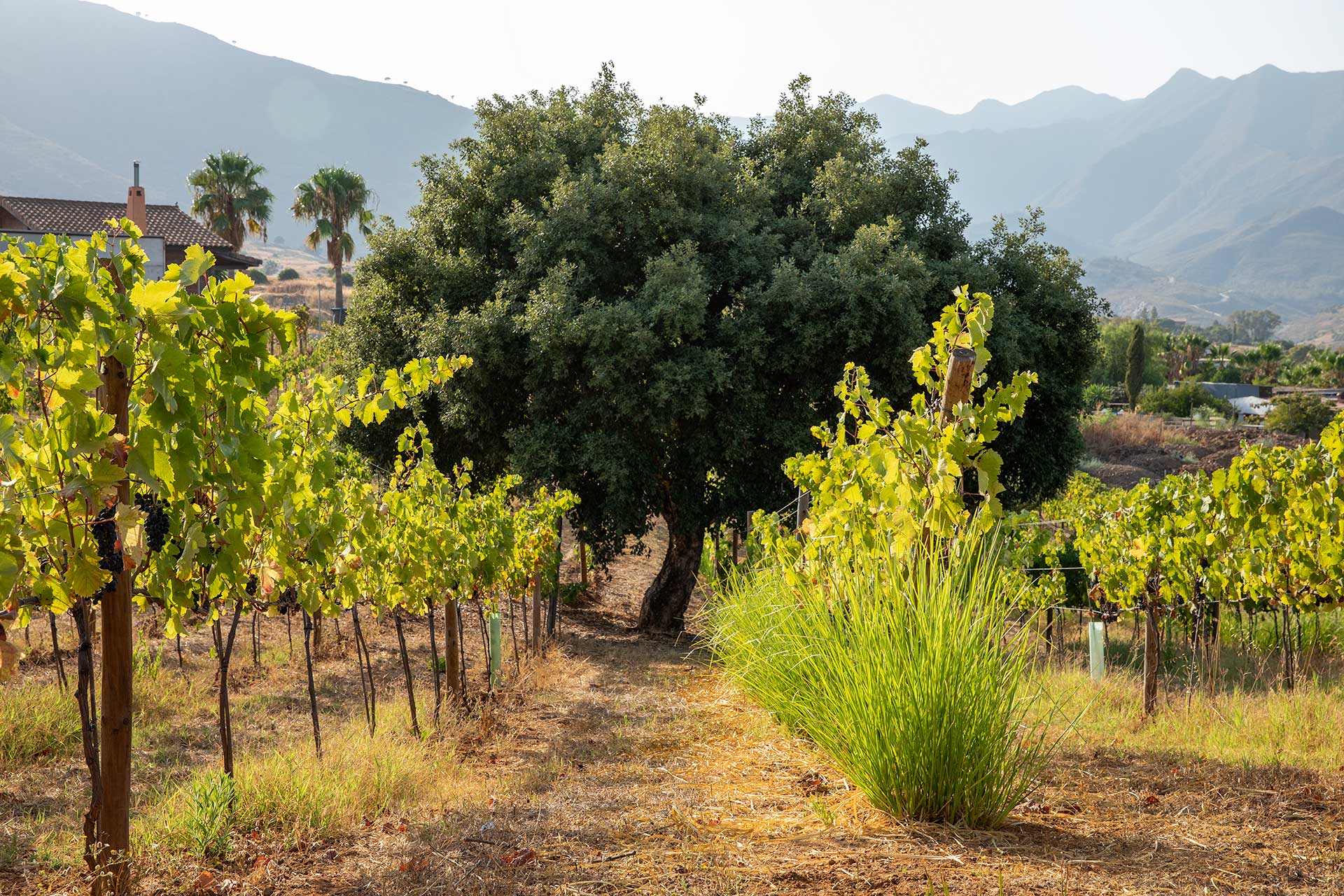 Fruit trees and herb plants increase biodiversity in the vineyard. 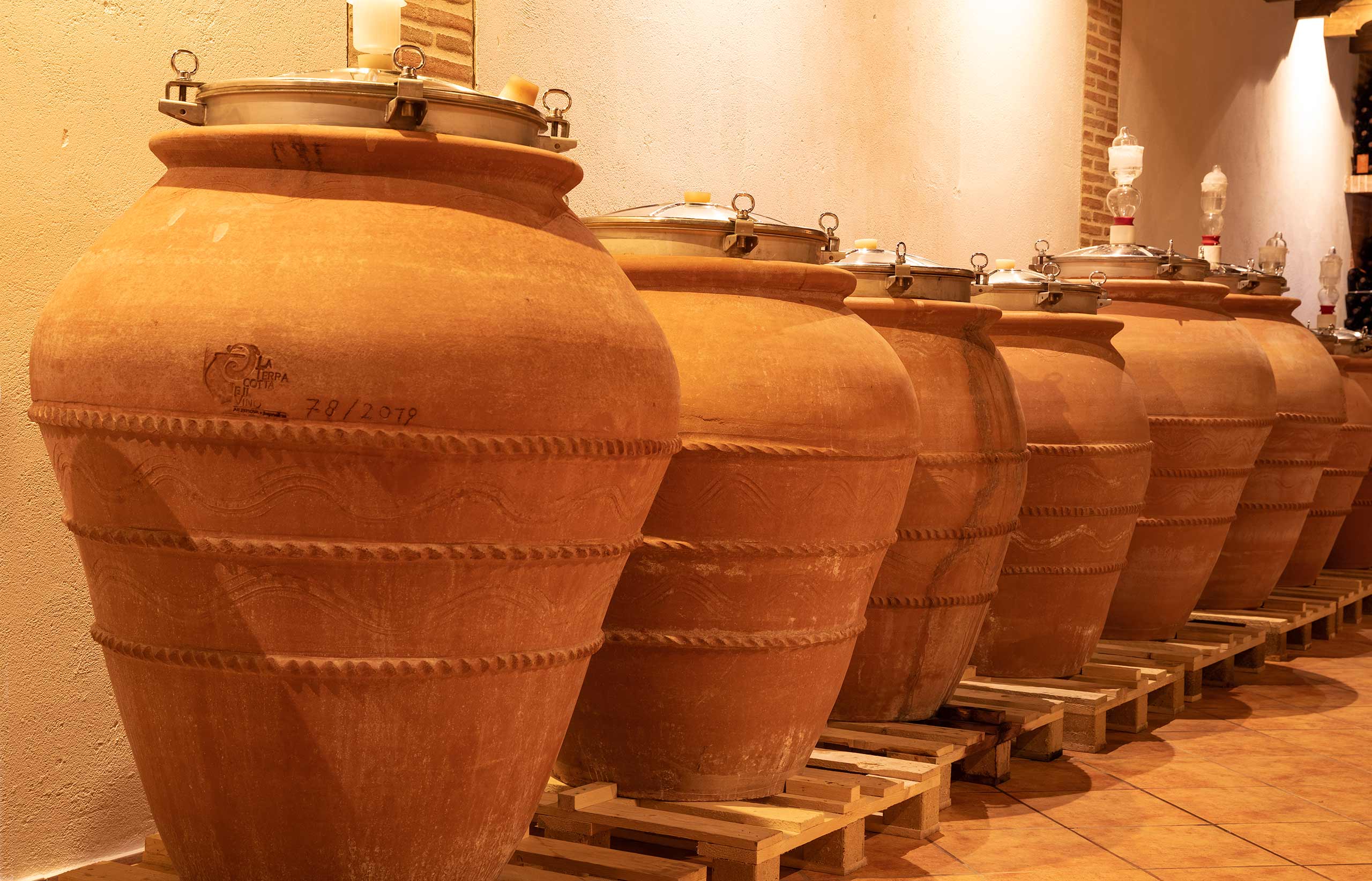 We mature our wine in clay amphorae and use this age-old technique to prevent our wines from absorbing foreign flavors.

„Natural wine is not new. It is the wine as it always was – only today it has become a rarity. Today it is like a drop in the ocean – but what a drop!”